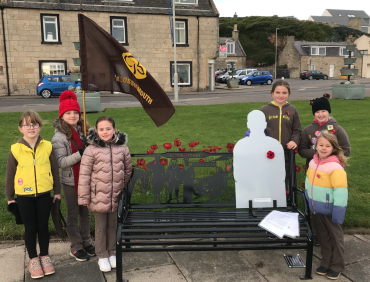 Girlguiding members from Moray have come out in force to show their support for current and veteran service men and women by marching in multiple parades throughout the county.

Brownies, Guides and Senior Section members, aged between 7 and 18, walked in multiple Remembrance Parades across Moray on Sunday morning to show respect for current and former members of the armed forces who risk their lives for our country.

Amie Robertson, 15, from 3rdForres Guides, said: “Remembrance Sunday is good for our girls to take part in as we are remembering those who changed history. At this year’s Remembrance Parade, we had a lot of younger Girlguides taking part for the first time.” She continued: “As a young leader I was proud of how well the girls did.”

Emma Robertson, 16, also added: "it was a lovely day, not only because of the weather, but the amount of people who showed up. I felt proud as newer Guides took on the responsibility of laying down the wreath on behalf of Girlguiding."

Local Guide leader, Louise Winder, said: “it is great to see so many young girls taking part in such an important national event. Their understanding of the events surrounding Remembrance Sunday is wonderful and their support for the British Legion heartening.”

Girls from 1stKeith Guides and Brownies showed their respects by marching in two separate parades on Sunday. The first saw 21 members marching in Newmill, followed by 24 girls attending the parade in Keith later on in the day.

Empowering girls to take action and make a difference is just one of many opportunities Girlguiding Scotland can offer girls and young women aged 5 to 25, offering a hugely varied programme incorporating everything from international travel to adventurous activity and camping, to campaigning.

As the leading charity for girls and young women in Scotland, Girlguiding Scotland builds girls’ confidence and raises their aspirations, giving them their own space to have fun and build friendships.